It’s been a record-making month for Apple.

It crossed a $1 trillion market cap at the beginning of August, a Wall Street first, and has notched eight separate all-time highs since then. Its rally also has put it on track for its best one-month gain since July 2013.

The charts suggest it could be setting up for a pullback, according to Matt Maley, equity strategist at Miller Tabak.

“It is getting a little bit stretched,” Maley told CNBC’s “Trading Nation” on Tuesday. “I wouldn’t be surprised if we saw it take a little bit of a breather here, which would actually be healthy.”

Apple’s relative strength index is close to year-to-date highs at just more than 70. Any reading above 70 indicates a stock is overbought. The stock began the year at less than 40, closer to the 30 threshold indicating oversold conditions.

“It’s a 62 percent premium to its 200-week moving average. That’s the same level it reached in 2015 just before the stock pulled back for a couple of weeks there,” he said. 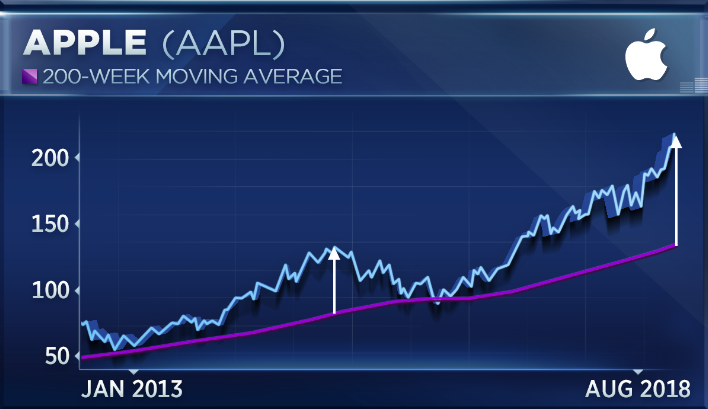 At their peak in May 2015, the shares were trading more than 62 percent above their 200-week moving average. Apple stock then pulled back around 19 percent through the rest of the year.

“I don’t know if we want to be chasing the stock, maybe looking more to buy it on dips rather than chase it,” Maley added.

Gina Sanchez, CEO of Chantico Global, said a change in investor behavior has driven Apple’s rally, but that momentum could be fading.

“Market sentiment has started shifting away from growth and more towards value and Apple was the best value of the tech names because it is selling a lot of product and its products are good and strong,” Sanchez said Tuesday on “Trading Nation.” “If its best asset was the fact that it used to be cheap, it is less cheap now.”