A 170 percent run-up this year has swept Advanced Micro Devices to the top of the tech sector and the broader S&P 500.

One technician said AMD could be due for a breather, while another semi stock could soon rally.

“AMD has had quite a run. I love it long term but I do think it needs to pause here,” Frank Cappelleri, chief market technician at Instinet, told CNBC’s “Trading Nation” on Wednesday.

AMD was lower Thursday, though still 11 percent higher for the week. Its shares have had an explosive rally this year, charging 87 percent higher this quarter and 44 percent in just the past month.

Its gains have pulled it nearly 102 percent above its 200-day moving average, a “rare phenomenon” which Cappelleri said has echoes in its past.

“We can’t forget that very similar activity happened in 2016. You go back then and from February to August … again traded 100 percent above its 200-day moving average,” said Cappelleri. “At that point it did take a pause which extended until November until it saw an all-time high.”

After a period of consolidation in its third quarter of 2016, AMD then broke out to highs in mid-November and rallied another roughly 30 percent to close out that year.

“AMD currently has built up quite a cushion. It could stand to do the same thing and it would be healthy to do so and then from there we could talk about long-term all-time highs again,” he said.

Another semi stock may soon rise up as AMD takes a pause, said Cappelleri.

“KLAC is very interesting. It’s up 12 percent for the year which just about matches what the SMH semiconductor ETF has done so it’s kind of off people’s radar screens just a bit considering how well some of the other tech names have done and that’s kind of why I like it here,” said Cappelleri. 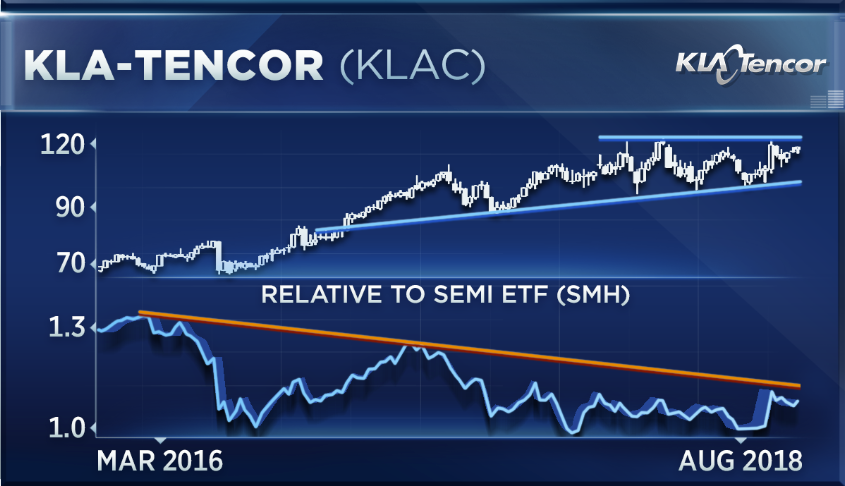 KLA-Tencor has run up against weakness in the past month, dropping nearly 9 percent against the SMH ETF’s 1.5 percent decline. Just this week it has fallen 7 percent.