Small-cap stocks erased all of their gains for the year on Tuesday, and the Dow Jones Industrial Average at one point was not be too far behind.

The Russell 2000, composed of publicly traded companies with a market capitalization between $300 million and about $2 billion, shed 0.8 percent on Tuesday, putting it into the red for 2018, down 0.6 percent.

The index was down as much as 2 percent at one point.

The small-company benchmark is in correction territory, down more than 12 percent from its record, reached at the end of August. The index is down nearly 10 percent month to date.

Small caps were a hot trade earlier this year. Their high level of exposure to domestic markets was seen as a hedge against global headwinds such as trade wars and currency exchange.

Dow transports and mid-cap stocks, measured by the S&P Mid Cap 400, were also in correction territory. A correction is measured as a 10 percent drop or more in a stock or stock market index from its recent high.

The Dow Jones Industrial Average, a bellwether for the general stock market and U.S. economy, was closing in on correction levels too — down more than 7 percent from its own 52-week high at one point Tuesday. The Dow ended the day 126 points lower after losing 500 points at one point in afternoon trading. 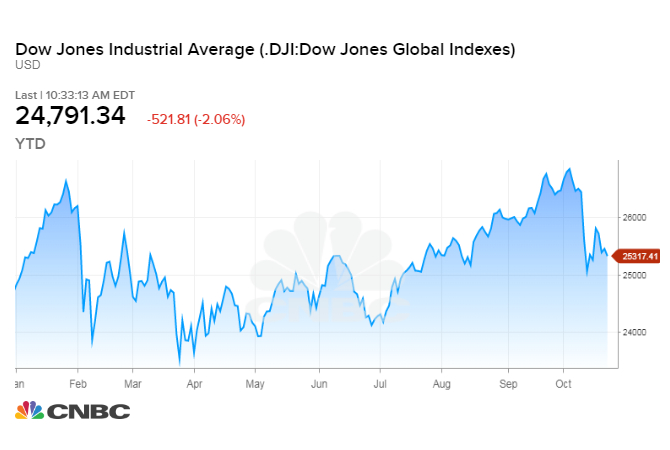 Seventy-four percent of the S&P 500 companies, meanwhile, have already reached correction level this year, and 200 companies in the S&P are at bear-market levels, signifying a drop of 20 percent or more from the 52-week high. Of those 200, roughly 20 percent were below their 52-week high Tuesday.

October has been an especially volatile month for equities and Tuesday was no exception. The Dow Jones Industrial Average led lower by Caterpillar and 3M, which disappointed investors in their quarterly earnings reports, before recovering most of those losses. The S&P 500 ended Tuesday 0.6 percent lower while the Nasdaq Composite ended 0.4 percent lower and was briefly positive.