A man walks along Wall Street as a taxi turns a corner near the New York Stock Exchange in New York, on Monday, June 11, 2018.

The professional and business services industry led job gains for the month of September, besting laggards like the leisure and hospitality sector, according to the latest government jobs report.

The U.S. economy created 134,000 jobs in September, coming in below the 185,000 payroll growth estimate from economists surveyed by Refinitiv. But the unemployment rate fell to the lowest since 1969 and August’s and July’s figures were revised much higher.

Here are the net changes by industry for September. 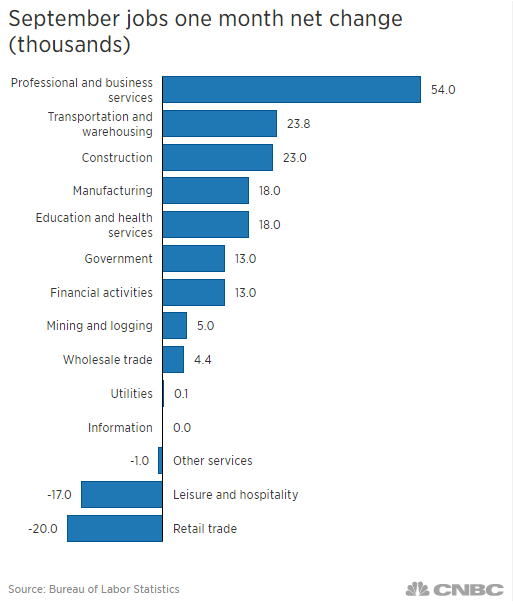 The professional and business services industry added 54,000 jobs in September, leading the categories. This industry includes jobs such as lawyers, accountants, consultants, architects and engineers.

Transportation and warehousing was also a bright spot in the report, gaining about 24,000 jobs for the month.

On the flip side, the leisure and hospitality sector suffered job losses of 17,000 in September, perhaps affected by weather, the government said.

The survey period for September’s data included when Hurricane Florence hit the East Coast, though the Labor Department could not quantify the storm’s impact.