It’s the moment of truth for tech this week.

Around one-third of the tech-heavy Nasdaq 100 reports in the coming days with industry leaders Amazon, Microsoft, Google parent Alphabet, and Intel among those set to open up their books.

One area of tech looks like a bet on long-term growth to Mark Tepper, president and CEO of Strategic Wealth Partners.

“Amazon, Google, Microsoft — we like and own all of these, and one of the things that all three have in common is that they’re huge players in cloud computing and that space is going to continue to see accelerating growth over the next several years,” Tepper told CNBC’s “Trading Nation” on Friday. “We think cloud usage is actually going to double in the next few years.”

Tepper says one of those cloud stocks looks like a better deal than the rest.

From a valuation perspective, Alphabet also looks cheaper than its peers. It trades at 48 times trailing earnings, below Microsoft’s 50 times P-E ratio and Amazon’s 140 times valuation.

Bill Baruch, president of Blue Line Futures, sees Microsoft as the best bet of the bunch based on its charts.

“Microsoft is the most constructive,” Baruch said on Friday’s “Trading Nation. “It’s the only one holding above the 100-day moving average, and there’s a nice constructive trendline going back to end of last year. I think it’s priming to head higher.”

Microsoft is currently trading more than 2 percent above its 100-day moving average. It briefly broke below that trendline in mid-October though quickly recovered.

Intel’s charts tell a different story, according to Baruch.

“If you take a look at Intel, its best days are sort of behind it in the sense it’s peaked midyear, it’s moved down, and you’ve got the death cross that took place in September, and then now you have the 100-day moving average looking to push through the 200-day,” said Baruch. “I would stay away from Intel.” 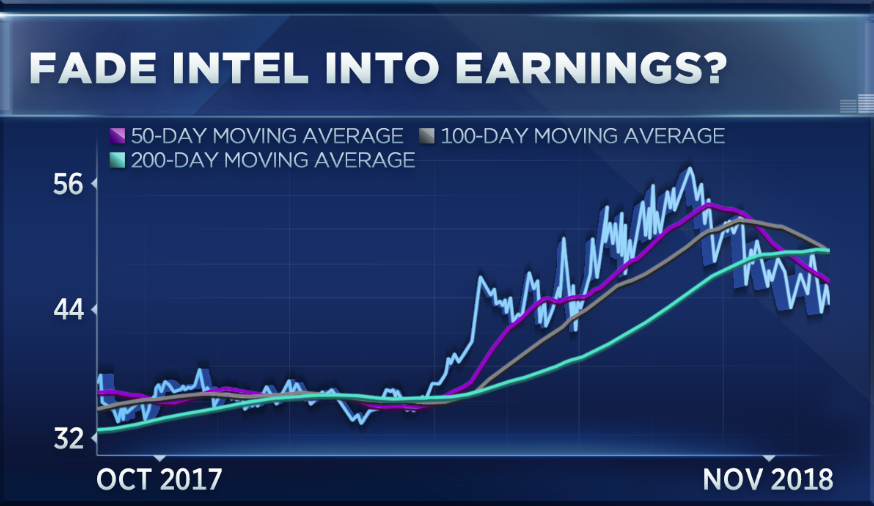 Sell-offs since a June peak have taken Intel shares down to levels not seen since February. The stocks’ 200-day moving average broke below the 50-day moving average in early September, a bearish technical signal pointing to a decelerating trend in price.