Goldman Sachs economists said it’s more likely than not that U.S.-China trade negotiators will not reach a deal in time to head off higher tariffs on March 1, and importers could rush to order their goods in January and February ahead of the deadline.

President Donald Trump and Chinese President Xi Jinping agreed to hold off on further tariffs until March 1 so the two sides could negotiate a trade agreement. China also agreed to remove new auto tariffs on U.S. imports, and the U.S. government reported that China is fulfilling another promise to purchase American soybeans, with its first significant order in six months, amounting to 1.13 million tons.

But they have to show some progress by the March 1 deadline in order to delay further action. “While we think it is a close call, we believe it is slightly more likely that negotiations will fall short of what is necessary for a further delay,” wrote the Goldman economists. 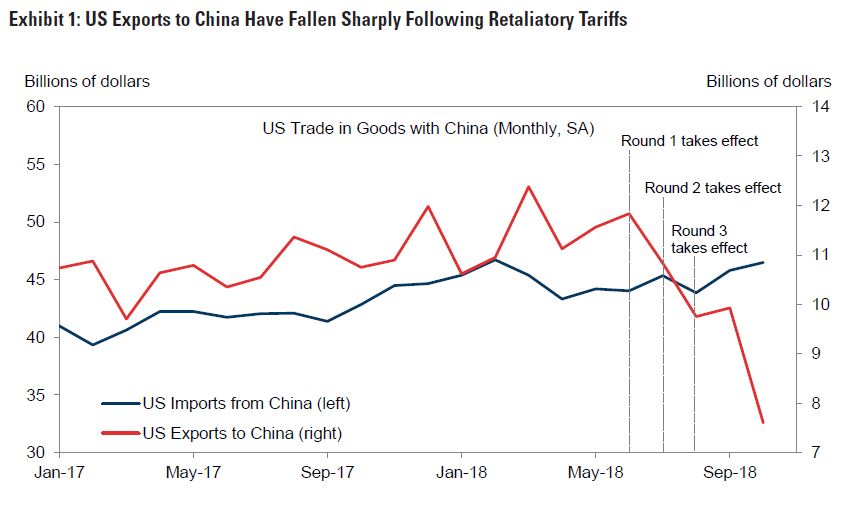 Goldman said international trade data reflects the front loading of goods ahead of the last round of tariffs, and also the fact that soybean purchases had fallen off dramatically.

The October trade data was the first look at what happened after tariffs on $200 billion in Chinese goods and on $60 billion of U.S. goods went into effect in September. Goldman said imports and exports were both pulled forward before the $200 billion tariff round went into effect Sept. 24, and they both fell after tariffs were implemented, just as they had done after the first round.

Over the summer months, the U.S. had also implemented 25 percent tariffs on $50 billion in Chinese imports, and China responded in kind.

The effect was a widening in the U.S. trade deficit. “Declining exports along side modestly increasing imports pushed the trade deficit with China to an all-time high in October,” the economists wrote.

U.S. imports from China are about $5 billion lower on an annualized basis and exports are about $15 billion lower, due to seasonal factors surrounding soybean exports to China. The economists said there have been sizable shifts in a few large categories, which includes the impact from soybeans. About 60 percent of annual exports of soybeans to China are in the fourth quarter, about 25 percent in October alone. 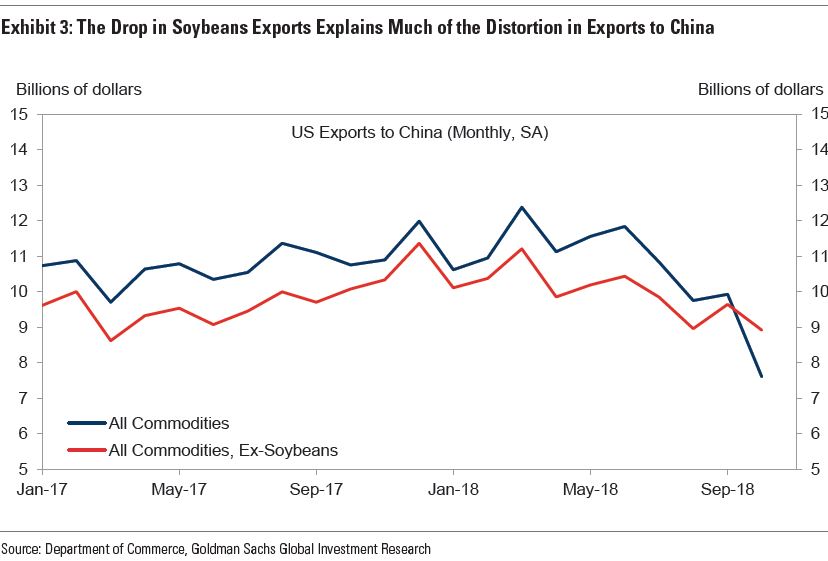 “Excluding soybeans, exports to China are only modestly lower on a seasonably adjusted basis,” they wrote. As for imports, U.S. imports of electronic circuits and memory components rose ahead of the second round of tariffs and fell sharply after they were put in place

If there is no agreement by March 1, tariffs are scheduled to rise to 25 percent from 10 percent on $200 billion in Chinese goods.