Avocado toast and that extra side of guacamole are probably going to get more expensive if President Donald Trump‘s newest trade threat becomes a reality.

The United States gets the vast majority of its supply of the popular fruit from Mexico. If Trump’s surprise threat of 5% tariffs on imports from the country goes into effect, companies ranging from importers like Calavo Growers to restaurants like Chipotle Mexican Grill will likely start paying more —and analysts say the increases are likely to get passed onto consumers.

Shares of Chipotle — where diners already pay extra for guacamole— fell 2% Friday on the threat of rising prices. The burrito purveyor goes through more than 450,000 avocados per day, according to the company.

“Over the last year, our supply chain team has been working to diversify our produce supply consistent with our food with integrity principles,” the company said in a statement to CNBC. “If the announced tariffs are enacted, they would negatively impact our costs and we are monitoring the situation and working with our suppliers to minimize the impact.”

Chris Brandt, chief marketing officer at Chipotle, said last year that “guac has long been one of Chipotle’s most beloved items,” adding that customers order roughly 50 million pounds of it per year.

“If avocado prices go up, it’s impactful to their bottom line,” Setyan told CNBC in a phone interview. “If we do see another big step up because of tariffs, and it is a longer lasting issue, the cost would probably get passed on to the consumer.”

Avocado prices began to spike in late March — based on higher demand from retailers advertising the fruit, lower expected short-term supply, less harvesting during the Easter holiday and a lighter California crop this year, said Setyan, who has a “neutral” rating and $700 price target on the stock.

By one metric provided by Wedbush Securities, prices of the Hass avocado from Michoacan have already rallied 58.8% year to date.

But Seytan pointed out that avocado prices are already volatile, known to swing 20% to 30% in a year. Much of that is already reflected in Chipotle’s forward guidance.

“In that context “a 5% move might not be all that big of a deal — you do get those wild swings sequentially,” Setyan said.

International farm products company Calavo Growers sources most of its fruit from Mexico and was also under pressure Friday. Shares of the Santa Paula, California-based company were down as much as 4%.

Stephens analyst Ben Bienvenu said that in recent years, Mexican crop has accounted for 80% to 90% of total avocado volumes entering the U.S. supply for the full year. That amount was set to be higher in 2019, since California trees are in an “off year” from production given the fruit’s two-year production cycle.

This year, the crop prices from Mexico have doubled from $25 in January to more than $50, according to the U.S. Department of Agriculture. Because Calavo buys fruit in bulk from Mexico, and retailers charge customers per piece, there is still some “cushion” to “better absorb cost increases” by passing them on to the consumer, Bienvenu said.

“While these tariffs have the potential to create margin pressure for importers like Calavo, we would note that the mechanics of how avocados are purchased and sold create flexibility for the supply chain to pass along higher costs to the consumer,” Bienvenu said in a note to clients Friday. “Additionally, avocados are some of the more profitable produce that retailers sell – these robust margins allow retailers to manage cost pressures as they occur.”

According to the White House, new tariffs are meant to pressure Mexico to improve border security measures, and are expected to go into effect June 10. The president tweeted Thursday night the tariffs will remain in place until “the Illegal Immigration problem is remedied,” and the White House said those tariffs could could increase to as much as 25% on October 1 if Mexico does not substantially stem illegal immigration across its northern border. 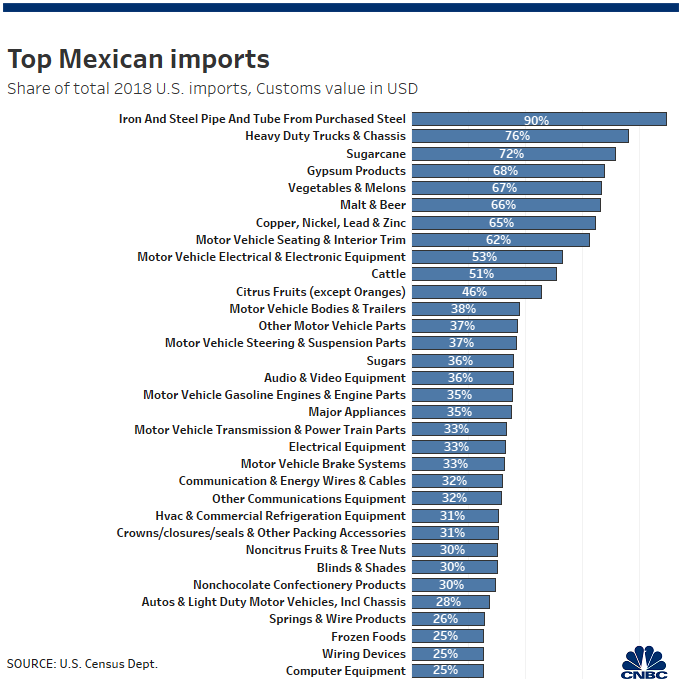