There have been plenty of reasons lately to worry about the market and economy, but among America’s wealthy fear is no way to manage money. Individuals with at least $1 million to invest in stocks and other assets have been doing a good job of tuning out all the noise, and as usual, it was the right call.

Even as trade wars persist, recent jobs numbers disappoint and yield curves invert, stocks had a run of six straight positive days before Tuesday’s stall, and the market is near an all-time high. And that is what America’s millionaire investors were expecting all along.

Americans with $1 million or more in investable assets are bullish on stocks and the economy for the duration of 2019, according to the latest CNBC Millionaire Survey, which was conducted in May across 750 affluent individuals. The market sentiment of the wealthy has improved since the last time CNBC’s biannual survey of millionaires was conducted in fall 2018.

To be clear, confidence in stocks is not a hugely bullish call — the S&P 500 already is up nearly 15% so far this year. But importantly, it is an indication that these investors are not worried amid a great deal of recent market noise.

The recent yield-curve inversion stoked recessionary fears, but the wealthy are not betting on a sudden and large reversal in the U.S. economy. The percentage of millionaires who think the economy will be weaker at year-end declined from 29% in fall 2018 to 23% in May, while 39% percent of the wealthy think the economy will end the year strong. That’s up from 31% in fall 2018.

Another 38% think the economy will be the same at year-end, putting distance between their sentiment and widespread fears of slowing global growth and a recession in the U.S.

The Fed’s shift from a series of rate cuts in 2018 to a more dovish stance this year has been viewed as a primary catalyst for recent strength in stocks. But importantly, millionaires were not swayed by a belief that the Fed would start cutting rates aggressively in terms of maintaining their confidence, even though it is a bet that some of the market’s most well-known billionaire hedge fund managers are making.

The most important millionaire investor lesson

Tuning out the noise is one lesson to be learned from wealthy investors. Equally important and related: Millionaires do not make major, sudden changes to investment portfolios.

Wealthy Americans do not expect to change their portfolio allocations over the next 12 months, and equities continue to represent the largest portion of investable assets among all age groups surveyed.

The most popular sectors among millionaires currently are financials, technology, energy, health care and industrials, but wealthy investors indicated in the May survey that they are not heavily favoring any sector over the rest of the year. When asked which sector would receive the greatest amount of investments, technology (15%) was the top choice, but notably below the 24% of millionaires who said that no single sector is a favorite.

Investment portfolios do change over time and based on age, as they should, but not much during any single year of market action.

Millionaire investors age 55 and under currently have 10% exposure to bonds versus a 21% fixed-income weighting of the wealthy ages 56–69 and those 70 and over. Investors 55 and under are also slightly more likely to invest in international equities and use short-term instruments like money-market funds, CDs and checking/savings accounts (19%). U.S. stocks are by far the most popular asset class for investing dollars at every age.

During periods of market turmoil, investors often hear about hedges like precious metals, but across all age groups these wealthy investors are shunning gold and silver, with only 1% at most saying they plan to allocate portfolio dollars to them. 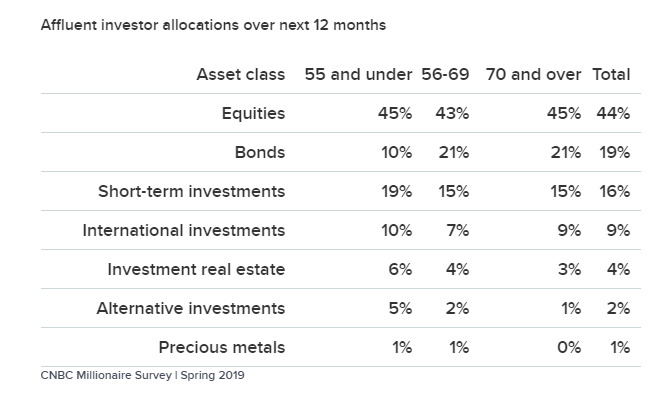