Oil prices have been crushed by worries about weaker demand and a slowing global economy, but the market could begin to price in greater geopolitical risks if there are more attacks like the one on two oil tankers in the Gulf of Oman on Thursday.

But even as analysts say oil could rise on Mideast tensions, they also say it could fall back to the bottom of a wide range — between about $50 and $80 for Brent, if the trade war fears dim the economic outlook for the buyers of oil.

“I wouldn’t say we’re at a tripwire yet, but we’re getting there,” said John Kilduff, partner with Again Capital. Kilduff said oil was headed to $50 until the news of the attack. There have also been forecasts that if the situation in the Middle East intensifies, the price of crude could touch $100.

After losing 4% on worries of oversupply Wednesday, crude futures bounced back 2% Thursday on reports the tankers sustained significant fire damage. It was unclear who attacked the ships, the second such attack in just about a month, near the entrance to the Strait of Hormuz, the world’s busiest oil shipping lanes. West Texas Intermediate crude futures were trading at $56.25 per barrel, and Brent crude futures for May were at $61.13.

“You’re in the $60s or $80s. If it’s all about trade wars, the economy is tanking,” said Helima Croft, head of global commodities strategy at RBC. “That’s the binary nature of this market.” She said a major geopolitical incident could drive the price of Brent as high as $80, especially if trade worries dissipate.

A good meeting between President Donald Trump and Chinese President Xi Jinping at the G-20 later in the month could also be a positive for oil, if it points toward a trade agreement, she said.

“I think the oil traders don’t know how to deal with Iran risk, but they do know how to conceptualize a trade war destroying demand. They can’t distinguish in the Middle East between what is noise and what is the brink of a shooting war,” she said. “The summer is going to be this: What war is going to dominate the market? A trade war or a shooting war?”

U.S. Secretary of State Mike Pompeo said Iran was behind Thursday’s attack and other attacks in the region. The two ships are the Kokuka Courageous, a chemical tanker that was loaded in Saudi Arabia and was enroute to Singapore, and the Front Altair. The Front Altair was carrying a cargo of naptha, a petrochemical feedstock, from the Persian Gulf to Japan.

“The supply in the U.S. has become a firewall against geopolitical events,” said Kilduff.

But analysts say the market has been ignoring the potential for more attacks on Middle East oil assets, even as the U.S. sanctions bite into Iran’s economy and limit its ability to sell oil. Even so, Brent is down about 18% since the end of April.

“It is a factor that the market sell-off has ignored,” said Ed Morse, Citigroup’s global head of commodities research. “The world is fairly fragile, and we could see a higher probability of a drop in production generated by political events, rather than by economic tightness, and it could be Iran. It could be Iraq. It could be Libya. It could be Nigeria. It could be Venezuela.”

Morse said these are among the factors that could drive oil higher this summer and into the fall. He also said sentiment will matter and negative news on the trade war could weigh on the market.

“[Brent] oil is more likely to hit $75 before it hits $50,” said Morse, noting a move much higher could require better economic data. He said Brent prices should be more sensitive to geopolitical worries than WTI, which reflects the U.S. market, and that’s also where inventories are visibly building in weekly government data. The gap between the price of Brent and WTI could continue to widen temporarily.

There have been a number of other attacks recently, including a missile attack Wednesday that struck the arrivals hall of an airport in southwestern Saudi Arabia, injuring 26 people. Houthi rebels were said to be behind that attack and others. Last month, a drone attacked a Saudi oil pipeline, temporarily putting it out of commission. The Houthis, said to be backed by Iran, have been fighting Saudi Arabia in Yemen, after driving out the Yemeni government in 2015. 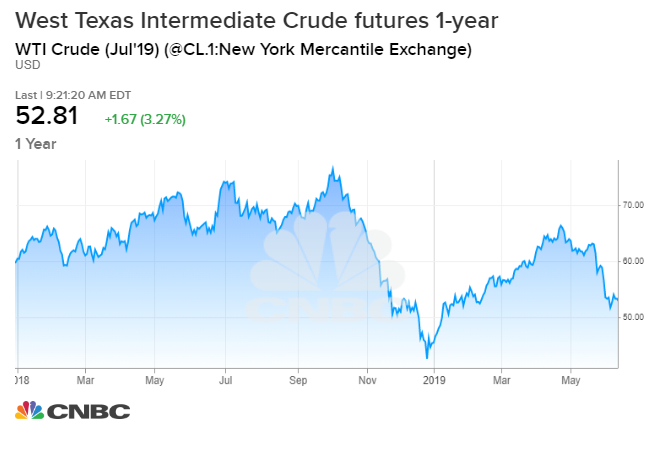 “We’re going to get more of these … as long as we have crippling sanctions in place that they believe are intended to cause economic collapse and regime change. They’re not going to back down. I think it’s going to be a hot summer,” said Croft.

Croft said it will be important to see if European leaders are able to work with Tehran to find a way to lessen the impact of U.S. sanctions and keep it from abandoning the nuclear deal it struck with the U.S. and five other countries. The Trump administration dropped out of the agreement, calling it one-sided, and reinstated sanctions on Iran last year.

Iran has threatened to walk away if there’s no resolution by July 7. It could then return to enriching uranium, at levels closer to weapons grade.

“The question is will it be a nuclear summer?” said Croft.

The incident occurred as Japanese Prime Minister Shinzo Abe was in Tehran, conducting talks in an effort to cool tensions between Iran and the U.S.

“Abe is in Tehran trying to get an off-ramp, and a Japanese tanker is struck. To me, at the minimum it shows the challenges of trying to reach a diplomatic solution, as long as the United States is pushing coercive diplomacy,” said Croft.

Morse said the supply outside of the U.S. is tight. He said the world market is particularly low on the heavy grade of crude produced by both Iran and Venezuela, both under U.S. sanctions. More than 1 million barrels of Iranian oil has been removed from the market by U.S. sanctions.

“Meanwhile, on the sidelines OPEC plus has decided not to put more oil on the market,” Morse said. OPEC, plus Russia, is expected to retain its agreement to hold back production.