Wall Street suffered from whiplash throughout August as trade headlines and recession angst sent stocks on a wild ride during the last full month of summer.

The S&P 500 posted 11 moves of more than 1% in 22 trading sessions for August. Those moves included three declines of at least 2.6% as well as the index’s worst day of the year on Aug. 5. The Cboe Volatility Index (VIX), widely considered to be the best fear gauge on Wall Street, traded as high as 24.81 in August before pulling back to around 18.

The choppy trading action this month was driven primarily by two factors: an escalation in U.S.-China trade relations and a recession signal being flashed by the bond market. As trade tensions are expected to persist and bonds keep pointing toward a recession, the market’s volatile streak is expected to persist.

“It’s not just normal volatility. You’ve had this spike in these all-or-nothing trading days,” said Willie Delwiche, investment strategist at Baird. “Whether or not this continues, from a headline perspective, I don’t see a reason why it doesn’t.”

Here’s what happened in August

August began with President Donald Trump announcing in a tweet that an additional 10% tariff will be placed on $300 billion in Chinese imports starting Sept. 1. The announcement wiped out a gain of more than 1% for the S&P 500 that day. The index finished the Aug. 1 session down 0.9%.

On Aug. 5, Trump accused China of manipulating its currency after the yuan fell to levels not seen in more than 10 years. The S&P 500 dropped nearly 3% that day.

“I would be surprised if we made any headway,” Ogg said, referring to the trade talks. “My guess is the Chinese don’t want him as president, so they’re going to make it difficult for him.”

Stocks tried to stabilize after the sharp decline after the U.S. said it would delay some tariffs on certain goods from China. However, the upbeat sentiment in the market was short-lived as the 10-year Treasury yield fell below its 2-year counterpart.

This is known as a yield-curve inversion and is feared by experts because it has preceded recessionary periods in the past. The 2-10 yield curve first inverted on an intraday basis on Aug. 14, leading investors to dump stocks in favor of long-term U.S. debt and other traditional safe havens such as gold and silver. The Dow Jones Industrial Average plummeted

“The yield curve will need to begin to steepen again, led by a rise in longer-maturity yields, to send a more positive long-term signal for the economy and stocks,” said Tom Essaye, founder of The Sevens Report, in a note.

Trade tensions escalated once again last week after China unveiled new tariffs on $75 billion worth of U.S. products. Trump responded by ordering U.S. companies to move operations out of China and announced higher tariffs on a slew of Chinese goods.

Equities rebounded sharply in the last week of the month as both countries softened their rhetoric on trade. The Chinese Foreign Ministry reportedly said Friday that negotiators from both countries are maintaining “effective communication,” while Trump said some trade discussions .

Overall, however, the S&P 500 lost nearly 2% in August and logged in its worst monthly performance since May, when it dropped 6.6%.

Lots of losers, but some winners too

The energy and financials sectors were the worst performers in the S&P 500 in August. For the month, they fell 8.7% and 5.1%, respectively, as the trade war and inverted yield curve dampened expectations for global growth.

Concho Resources was the biggest decliner among energy stocks, losing a quarter of its value in August. Schlumberger and Devon Energy dropped around 20%.

Among the big banks, Bank of America was the biggest loser, falling around 10%. Citigroup, J.P. Morgan Chase and Wells Fargo also dropped at least 3.8% for the month.

Technology stocks also suffered as the sector lost 1.7% as stocks such as Skyworks Solutions slid more than 11% for the month. Overall, eight of the 11 S&P 500 sectors fell for the month. 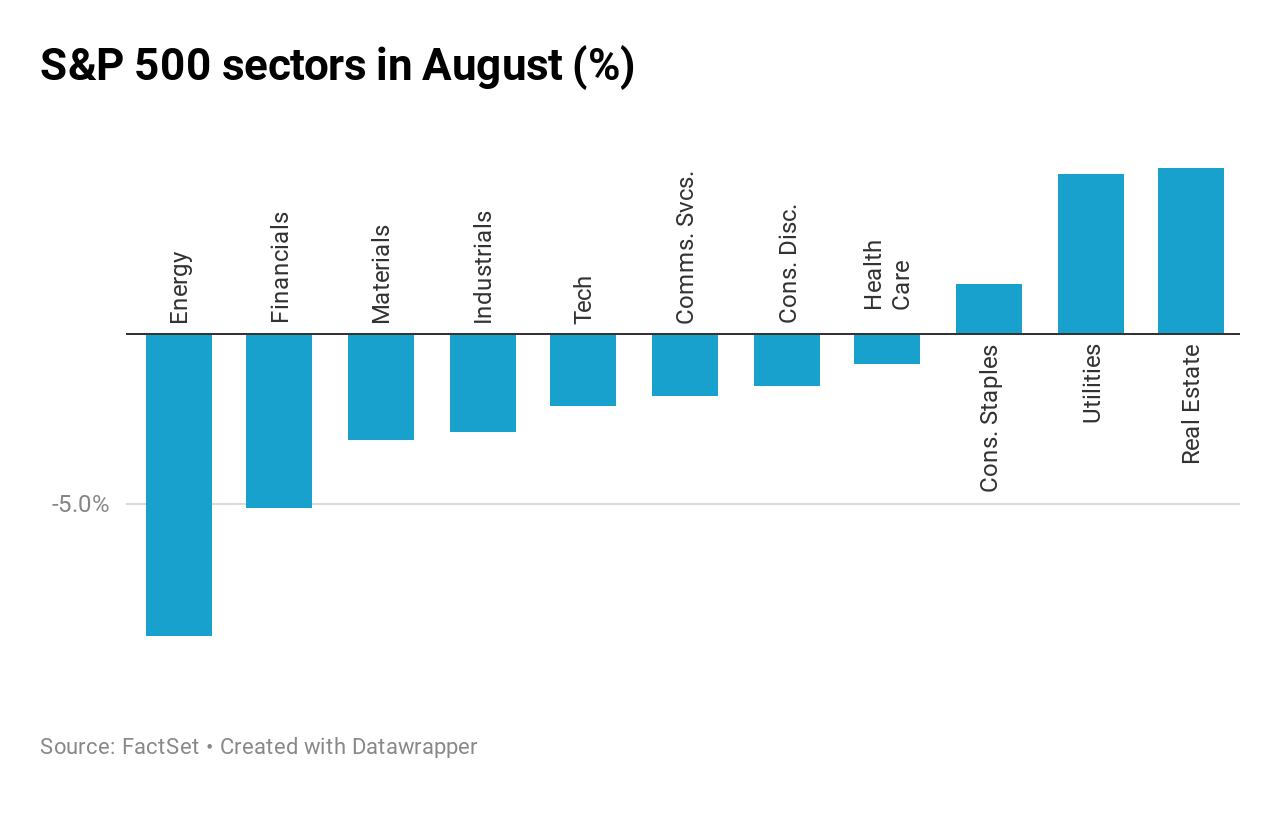 The big winners in August were traditional safe havens such as gold, silver and long-duration bonds. The SPDR Gold Trust (GLD) gained more than 7% in that time period while the iShares Silver Trust (SLV) jumped more than 12%. The iShares 20+ Year Treasury Bond ETF (TLT) also rose 10.8% in August.

No rest for stocks in September

Investors hoping the turn of the calendar will bring some calm into the market could be mistaken, if history is any indication.

Since 1950, September has been the worst month on average for the S&P 500. Data from the Stock Trader’s Almanac shows the S&P 500 averages a loss of 0.5% in September.

“It will be more ‘strap in’ than ‘exhale and expect something to change,” Baird’s Delwiche said.