As consumers check out Black Friday car deals, there’s a good chance some of them will consider heading down a costly path.

That is, they’ll go to trade in their existing car for a new one, even though the value of the trade is less than what’s still owed on it — so-called negative equity. And instead of walking away from the sale, they’ll join the growing share of buyers who are rolling their remaining balance into a loan for a new car.

“It’s definitely not the savviest financial move a shopper can make,” said Jeremy Acevedo, senior manager of insights at Edmunds, an auto-research firm and online buying guide. “It can turn into a vicious cycle that’s tough to overcome.”

More from Your Money Your Future:
How to keep a tax bomb from blowing up your holiday bonus
The number of 401(k) millionaires hits a fresh high
Here are the hidden benefits of a Roth IRA conversion

Against a backdrop of shifting consumer preference to SUVs and trucks and away from sedans and smaller cars, the average price for a new car has climbed to about $37,900, according to Edmunds. Improved technology and safety features add to the cost, as well.

For the 33% of buyers who roll their negative equity into a new loan — up from 28% five years ago — it generally means stretching out their loan over more time and paying a higher interest rate and larger monthly payment.

“They’re paying more for longer and at a worse interest rate,” Acevedo said. “It becomes a snowball.”

The average negative-equity buyer takes out a loan that stretches 75.7 months (more than six years), according to Edmunds. And to accommodate their rolled-over balance, they get a $39,186 loan for a car that costs an average of $33,365.

Their average monthly payment is $641, and they pay 7% in interest. That translates into paying more than $9,400 in interest over the course of the new loan.

In comparison, for a buyer with a trade-in that’s paid off, the average loan terms are 5.2% over 67.6 months. The monthly payment averages $521.

Also, because you’d be getting a loan for more than the car’s value, you might be required to have some sort of gap insurance. That type of coverage, which could cost anywhere from about $40 to $700 a year depending on the particulars, would pay the difference between the value of the car and what you still owe on it if your car is totaled or stolen.

Collectively, consumers owe more than $1.3 trillion in auto loans. While the share of those in serious delinquency — more than 90 days late — remains relatively low at 4.7%, it has has been creeping upward for the last five years, according to data from the Federal Reserve Bank of New York.

The problem is more pronounced among so-called subprime borrowers. For those consumers, with credit scores below 620, the delinquency rate was 16.3% at the end of 2018, according to separate research from the Federal Reserve Bank of Kansas City. 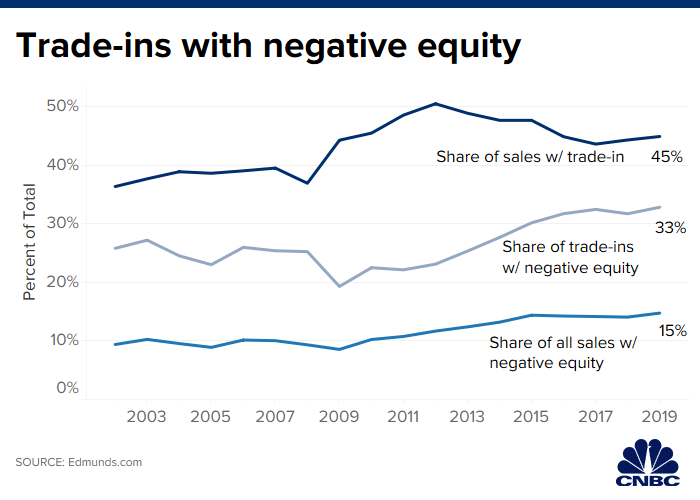 If you’re considering rolling over negative equity, experts say to think about the long-term ramifications instead of the immediate gratification of a new car.

“I think consumers need to not put so much stock in the newest version of whatever, because that’s where the damage comes from,” said certified financial planner Malcolm Ethridge, an executive vice president and financial advisor at CIC Wealth in Rockville, Maryland.

“It’s not about just buying a car; it’s that it’s so easy to buy right now that people are only keeping cars for a few years and then trading them in,” said Ethridge, who once worked in auto sales.

Edmunds data bear that out: Those with negative equity are trading in a car that’s just 3.9 years old, compared with an average age of 7.4 years for buyers who have paid off their existing loan.

“It’s tempting when people see great deals, and easier access to credit can make it seem like a good chance to jump in the market,” Acevedo said.

“But if you own a car and aren’t at a point where you owe less than it’s worth, the savvy advice is to hang back and try to pay it off as quickly as you can,” he said.